The Keys to Unlocking Your Successful Internet Entrepreneur Mindset – Part 4

Here’s the next installment in my 5-part series on the keys to unlocking your successful internet entrepreneur mindset.

There’s a mistake in thinking that so many of us make, and that is that we are always projecting what our future will bring based on our past. And in some form we ALWAYS get whatever we’ve projected for ourselves.

Add to that the fact that for many of us our mental focus is usually negative, and you can see how our thinking stands in the way of our achieving anything new. But most of the time we’re not aware of all this thinking. It’s subconscious. So we just believe that what our minds project is a fact. We don’t know that it’s only a thought.

So what are some of these self-defeating thoughts?

With or without realizing it, the majority of us tend to focus on what we don’t have, instead of on what we can do. We focus on:

You need to understand that these are nothing more than conditioned patterns.

Isn’t it strange that the majority of conversations that take place in the world have to do with what’s lacking? I understand this. I fell into the same negative patterns before I was turned on to the negative conversations going on in my own head.

I experienced this while I was still struggling. The majority of my conversations with others and in my own head was centered around LACK: a lack of money, a lack of time, a lack of happiness.

But all that thinking was unconscious to me until I got the necessary training, coaching and mentoring to undo it. And that was vital to my success.

The 1% Club of internet entrepreneurs do not project their future based on what is lacking. Instead we approach things with the mindset of “I will achieve X, Y and Z… and even though at this moment I’m not certain how it will happen, Time, Money and Circumstance will cooperate some way, somehow.”

And guess what? Time, Money and Circumstances always cooperate some way, some how in this scenario. Why? Because that’s exactly what was projected. Not lack – but success. And then you can’t fail.

As the Canadian author Basil King said, “Be bold, and mighty forces will come to your aid.”

Here’s what all this means. To achieve the financial and time freedom you 100% deserve, and that’s literally waiting for you to claim it for yourself, you need to do exactly what the 1% Club does. Specifically:

1) BE (in your mind) that a hugely successful internet business can and will happen for you, and . . .

This truly is the foundation for achieving everything you want.

On this blog, over time, I will give you ALL the specific tools and guidance you need to build a proven online machine. I know that what you will learn here works. I’ve seen it work for myself and many others.

But it cannot happen for you without your 100% Belief that it truly is possible.

The next important point for you to incorporate into your Successful Internet Entrepreneur Mindset is that the Top 1% of internet entrepreneurs share something else in common:

We positively refuse to take “No” for an answer.

As you may have noticed yourself over the years (just read the newspaper to see it!), most of the public tends to operate to one degree or another under the victim mentality. The common perception in the world is that life happens to us, and all we can do is learn how to put up with it.

Those of us in the top 1% decide ourselves how our lives and businesses will go, and when circumstances don’t cooperate we simply adjust our actions so we can still bring about the expected result. Notice that I said “expected.” That’s very important. As I’ve been saying all along, believing – being and living – our expectation can actually influence the outcome of events.

To put this another way…

Your outlook creates your outcome.

While that may sound like a cliché, it’s so much more. It’s fact. I want you to understand that when you EXPECT something to happen, you are sending out a very specific message. And the universe responds . . . every single time.

Can you see the difference between caving in to every unwanted circumstance versus using that very same circumstance as a signal that it’s time to change our strategy a bit in order to fulfill our expectation? And can you see why it’s so critical for you to adopt this mentality for yourself?

Remember Edison. He expected to succeed at inventing the light bulb. So instead of resenting it every time one of his efforts didn’t work, and seeing it as a failure, he saw it as providing valuable information that he could use to better fulfill his expectation. He saw the forces of the universe as being on his side – not against him. He just had to put himself in the right place so they could work for him.

Refuse to buckle under a “no,” and you can begin to LIVE the 1% mentality I’ve been describing. This will keep you on track toward reaping the MASSIVE financial rewards that come as a result. 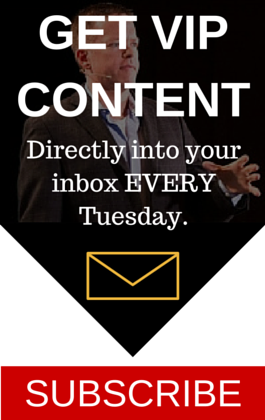 The Keys to Unlocking Your Successful Internet Entrepreneur Mindset – Part 3

The Keys to Unlocking Your Successful Internet Entrepreneur Mindset – Part 5